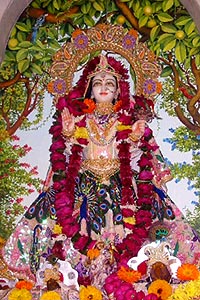 Vrnda-devi has a beautiful complexion the color of molten gold. She wears blue garments and is decorated with pearls and flowers. Her father is Candrabhanu and Her mother is Phullara-devi. Her husband is Mahipala and Her sister is Manjari-devi. She always remains in Vrindavana, immersed in love for Radha and Krsna and yearning to both arrange for Their meeting and taste the nectar of assisting in Their transcendental pastimes. (Sri Sri Radha-Krsna-ganoddesa-dipika)

Vrinda Kunda is where Srimati Vrinda Devi is said to contemplate how she will arrange the daily pastimes of Radharani and Krishna.

Next to Vrinda Kunda is Gupta Kunda, which is where Radharani is said to secretly meet Krishna. There is a beautiful deity of Vrinda Devi in the temple here. She has a yellow parrot on her left hand. This parrot is said to fly around Vrindavana and on returning tells Vrinda Devi what is happening there. The parrot is named Daksa and is said to have one lakh (100,000) disciples. Vrinda Devi arranges the pastimes in Vrindavana. Tulasi is an expansion of Vrinda Devi. Paurnamasi is the guru of Vrinda Devi.