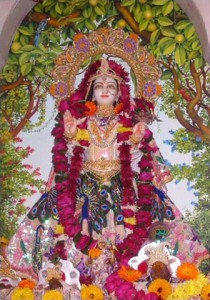 fields parched by the relentless Indian summer sun. The Vrinda Kunda area is set like an emerald among these empty fields. Three irridescent green English flycatchers perform their acrobatics just above the cool green waters. Two kokilas, madly in love, warble on the fifth note as they flit from tree to tree. The kingfisher reveals himself like a flash of bright blue lightning as he dives from the edge of the ghat to the water.

The sandstone temple, shaded by the luxurious foliage of the sami tree, reflects in the waters. The beautiful sunlight reflections play over the floral motifs on the carved sandstone. The kadamba flowers in the garlands spread their delicious fragrance all the way to the back of the temple where I ring the bell. All the trees have bloomed in succession assuring a constant supply of beautiful golden flowers for Vrinda Devi and Giriraj throughout the whole summer. It is sringar artik at Vrinda Kunda, as the enchanting deity of Vrinda Devi smiles sweetly on those who have come for darshan.

Punctuating the rhythm of the kirtan are the click-click-click of the stone carvers as they carefully craft delicate floral designs in the hard stone sitting beside the temple in the shade of the huge sami tree. Their presence marks the beginning of Phase II in the plan of Vrinda Kunda.

A wide veranda extending two feet over the water, held in place by intricately carved brackets; then a gorgeous colonnade with arches, with the three middle arches completely open and the two arches at either end filled with intricately carved jali work with a tree and Vrinda Devi’s parrots; huge carved teak beams extending from the colonnade to the building with small wooden slats forming a trellis where fragrant flower creepers will entwine – these are some of the plans slowly taking shape.

The ghats bordering the temple will also be completed as well as the large ghat on the opposite side facing the temple. The contractor has just gone to the mines to look for strong stone that will match and withstand sitting in water.

Gupta Kunda is also being excavated and given a beautiful half-elliptical shape and moved away from the wall so there will be more space for planting trees and flowers between the wall and the kunda. Most of the old ghat is being taken up, and the top few steps will be laid with new stone and a veranda. To supply shade, a small gumdrop tree has sprouted up by itself in soil so salty not even weeds grow there and is growing luxuriously just behind the ghat.

Between the Gupta Kunda ghat and the temple buildings, a long stone-pillared hall with a thickly thatched roof is to be built. The floor will be soft Yamuna sand, as not even weeds grow here, the soil being so bad. We can sit and have lectures here in the shade and take prasadam here sitting in the soft sand. One nice Indian lady from Sweden has donated for this.

A ten-foot-deep and ten-feet-on-all-sides sweet-water tank is almost complete near the canal that connects Gupta Kunda with Vrinda Kunda. Here we will store the sweet water that we pump from a little less than half a mile away from a bore well on a small plot donated by one of the local farmers named Shyam in honor of his father Jholu. A solar pump will pump this water into overhead storage tanks to be used in the kitchen and for watering the fields. This solar pump was kindly donated by Bhagwat Darshan Das who used to live in Orlando but has retired to Vrindavan with his family.

The state government is giving 45-percent subsidies on solar lighting systems. Yesterday they arrived to install three, so Vrinda Devi will have lights in the evening and when we close the doors for the bhoga offering. The panels are completely hidden behind the tall, carved parapet wall over the kitchen and sringar bhandar. One will be put on the two-story building so I can read Prabhupada’s books at night.

And of course, soon the rains will come and we will plant trees and flowers. The whole summer we had an abundance of beautiful red and yellow flowers from seeds given by Rupanuga Prabhu from Durban when I was there in January, so abundant that the babajis from Nandagaon occasionally stop by to pick some for their Giriraja Shilas. And someone is speaking Bhagavatam in some village, and they also stop by to pick some every day. Tulasi is growing in abundance after almost completely drying up in the very dry and cold winter. Everyone is taking advantage of this also.

When you all come for Kartik, we will have a special festival at the end of Kartik to mark the completion of Phase II. Then you can experience the very blissful atmosphere of the very special holy place I described in the beginning.