Some five thousand years ago, after Krishna and His associates 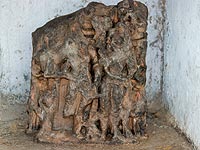 wound up Their earthly pastimes, the Lord’s great-grandson, Vajranabha Maharaja, installed Deities of Krishna all over Vraja. Deities were installed also at Vrinda Kunda. Later, unfortunately, They were disfigured by Muslim invaders and for some time They disappeared from human sight. Today, although They are no longer worshiped, They are still giving darshan in a small kutir by the side of the main temple, under an old chokara tree.

“Time I am,” Lord Krishna says in Bhagavad-gita, “the destroyer of the worlds.” As days, weeks, months, years and centuries succeed one another, civilizations rise and fall and the surface of the earth changes. By the time Sri Caitanya Mahaprabhu appeared on earth in 1486, all the places of Lord Krishna’s childhood pastimes were deeply buried under the jungles covering the land of Vraja. Therefore, Sri Caitanya Mahaprabhu instructed Srila Rupa and Sanatana Gosvamis to excavate the lost places of pilgrimage in Vraja, which they did. Lord Caitanya Himself visited the fifty-six kundas surrounding Nandgaon, including Vrinda Kunda and Gupta Kunda. Then, some time between the Muslim invasions and the turn of the twentieth century, Vrinda Kunda again disappeared from human sight.

Around 1920, the great Vaisnava scholar and saint Baba Madhava 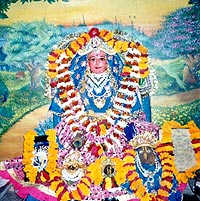 Dasa was born in a highly elevated brahmana family. A resident of Vraja Dhama for over fifty years, he spent his entire life as a sadhu. He also acted as a fiery reform leader. Responsible for the protection of many holy sites of Krishna-lila, he saved Pavana Sarovara from being drained by land developers. Baba Madhava also rescued Kalavata Hill, which bears the sacred footprints of Lord Krishna, and eleven other sacred hills in Vraja from the blind greed of land developers and road builders. (Government officials, unaware of the spiritual significance of these sites, were auctioning them to road builders to be chopped off as raw materials.) Baba Madhava Dasa also preserved the sanctity of the Govardhana parikrama path by successfully opposing, on behalf of many sadhus in the area, a proposed railway line that would have bisected the Govardhana parikrama path.

To beautify the land of Vraja, Baba Madhava Dasa regularly got wealthy Vaisnavas to donate many hundreds of fruit, flower and sandalwood trees, which he would then arrange to be planted in various holy places, such as the beautiful gardens of Radha Bagh and Krishna Bagh in Varshana. Vrinda Kunda, however, is the crown jewel of his lifetime of service to the holy Dhama.

After securing the property, Madhava Baba managed to get a Government grant to help him excavate the two sacred ponds, Vrinda Kunda and Gupta Kunda. Schoolboys from the Kishor Raman Degree College and a lady from Agra also helped. He then built a small temple and installed a Deity of Vrinda-devi on Jahnava Mata’s Appearance Day in the early 1980s.

The old mutilated sculpture under the chokara tree had been worshiped as Vrinda-devi for a very long time before Baba Madhava’s arrival. According to the villagers, some thieves had come fifty years before, stolen the sculpture and stored it near Charan Pahari, along with some other stolen sculptures. But when they brought a small truck to carry them away one night, even six or seven of them together could not lift the sculpture of Vrinda-devi. So they left it there. In the morning one villager saw the murti lying by the side of the hill and carried it back to Vrinda Kunda.

Baba Madhava Dasa had many plans to develop Vrinda Kunda: a surrounding compound wall, a small ashram for sadhus, a larger, more beautiful temple for Vrinda-devi, and lush gardens.

Vrinda Kunda’s History After Being Donated To ISKCON
The time factor, which imperceptibly devours the duration of life of all living beings, has no grip on Vaisnavas, because Vaishnavas are directly under the protection of their beloved Lord and their service to Him is not limited by time and space. Externally, however, Baba Madhava Dasa appeared to become sick, first with pleurisy, then cancer, and for almost a year he lived at the TB hospital. Knowing he would soon leave his body, he approached various babajis to take over the service of Vrinda-devi. By the Lord’s divine arrangement they all replied, “No men. No money.” Although some of them later changed their mind, Baba Madhava understood that His Divine Grace A.C. Bhaktivedanta Swami Prabhupada, who had introduced the worship of Tulasi-devi all over the world, was the natural guardian of Vrinda-devi’s interests, and thus he entrusted both the worship of Vrinda-devi and the development of the property to the devotees of ISKCON in 1989.

Surrounded by ISKCON devotees, Baba Madhava Dasa left his mortal frame on March 27, 1990 at the Krishna-Balarama Mandir in Vrindavan. Gazing at the beautiful painting of Vrinda-devi made by Govinda Dasi (the first ISKCON devotee to grow Tulasi-devi), his face shining with remarkable radiance, he ecstatically went back to his eternal home–the lotus feet of Vira-devi, the gopi friend and messenger of Vrinda-devi in Vrinda Kunda.

Since 1993, His Holiness B.B. Govinda Maharaja, Director of the Food for Life program in Vrindavan, has been feeding twenty-five sadhus and poor villagers every day in Nandgaon. And every Purnima (once a month on the full moon), more than four hundred village children come to Vrinda Kunda for lunch prasadam. Also on the occasion of Tulasi-devi’s marriage to Shalagrama in Karttika and on the disappearance day of Baba Madhava Dasa in spring, the devotees hold an all-night kirtana with the villagers and cook a feast for five hundred persons.

Every year, during the Gaura Purnima festival, at least a thousand devotees from all over the world come to Vrinda Kunda to bathe, feast and pray for eternal residence in Vraja. And around two hundred VIHE (Vrindavana Institute for Higher Education) students round up their twice-a-year seminars with a parikrama and feast at Vrinda Kunda.

In 1998 the Deity was again stolen. But again it was found, a repeated proof that Vrinda-devi never leaves Vraja, for it is her eternal place of service to the Divine Couple. Although the Deity has again been placed in her shrine, the daily puja is offered to a picture of Vrinda-devi–in accordance with Vaisnava tradition–until the new murti is installed. The new Vrinda-devi Deity has been completed and is awaiting her new temple to be constructed at which time she will be installed.

Madhava Dasa Baba’s Samadhi completed in March 1999
In 1992 a handful of ISKCON devotees formed the Vrinda Trust to maintain and expand the worship of Vrinda-devi all over the world, develop Vrinda Kunda as a place of pilgrimage and help restore endangered sacred spots in Vraja. Since Vrinda Kunda was largely unknown and inaccessible to the public, one of the first things the devotees did was to arrange for a large white sandstone road sign to be posted on the Nandgaon-Kamyavana road before the dirt road turnoff leading to Vrinda Kunda.

Under the determined leadership of Dina Bandhu Prabhu, a small crew of Vrinda-bhaktas patiently but steadily cleaned, deepened and filled the two kundas with sweet Yamuna water. They constructed new steps on the eastern bank of Vrinda Kunda and the foundation of Baba Madhava Dasa’s samadhi at the edge of Gupta Kunda. They dug a sweet-water well, cleared the land of thorn trees, planted vegetable and flower gardens around the kundas, repaired three rooms for visiting devotees and completed the construction of a solid stone wall all around the two-and-a-half acre property. Dina Bandhu Prabhu designed a beautiful wrought-iron gate ornate with parrots, which now graces the entrance to Vrinda Kunda.

The worship of the Vrinda-devi Deity installed by Baba Madhava Dasa soared to new heights as talented ISKCON devotees sewed wonderful dresses for Vrinda-devi, painted her beautiful face and body and enchanting backdrops for her shrine. Vidya mataji has been offering Vrinda-devi beautiful outfits since 1989.

The old temple of Vrinda-devi was in a dilapidated condition, so Dina Bandhu Prabhu joined with Acyuta Prabhu and searched for the excellent artist who still knows the wonderful art of carving sandstones. It is amazing to see that this tradition of Vraja-architecture, reminding us of the time when the Six Goswamis were present, is still being maintained. Many old temples are almost lost due to the previous owners loosing their power and sources of income but the Vrinda Kunda story is different. Here an absolute upgrade took place and this is only possible because of the genuine love Srila A.C. Bhaktivedanta Swami Prabhupada instilled in devotees like Dina Bandhu to serve Vrinda-devi with this new temple. We can only pray that this spirit will continue to live since Srila A.C. Bhaktivedanta Swami Prabhupada desired that his disciples participate in:
1. Fixing the broken places in Vrindavan
2. Cleaning Vrindavan
3. Helping to restore the glorious deity-worship

One thought on “Vrinda Kunda – History”